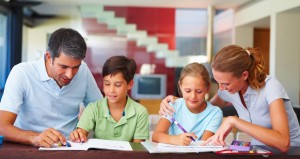 How To Handle Teens positively and effectively

Handling the teens of today is considered as easy as handling a hot potato with bare hands. Not an easy thing to do, especially if you think of the additional stress that gets added on with technology and all the well-meaning advice that is doled by aunts, relatives and the media at large.

It brings to the fore a vital question- Does it really need to be as tough as its often made out to be or can it be a rewarding and fulfilling experience for both the parties involved?

How To Handle Teens positively and effectively

The solution is neither black nor white, rather somewhere in between.

Much has been spoken about positive parenting and it is a much sought after Utopian scenario, but somehow it just seems that the cookie-cut agony aunt advices just don’t apply to your situation. As it goes, every parent and teen is different and so the situations are different too.

Positive parenting need not be a power play match with a win-lose kind of a deal, instead it is recommended to focus on trying to getting a good equation where you have learnt to positively negotiate with your teenager (who is also now a semi adult). While it is important that teens know who gets the final word (which is you), there has to be room for healthy compromises between both parties. This way there will be lesser conflict and will open up a way for healthy dialogue.

Set ground rules, but leave space for breathing. Talking to your teens peers and their parents is a good way to understand a little of their world while becoming a part of it in your own way.

While it’s terribly wrong to categorise a teen into one particular bracket, there are certain situations when you cannot help but put a label on them. It may not be your child but your teens peer and that is what makes all the difference. The adage about one bad apple is not all for nothing.

The trick here is that when you’re dealing with a group of difficult teens of which your child is a part of, it’s always better to focus on the alpha, the leader. If you deem it appropriate, try to create a situation where the leader is separated (physically) from your teen. Once you have accomplished this, you can then decide on the course of action for your teen.

You say North, they say South

Assuming you have a teen who believes in doing the exact opposite of everything that comes out of the parents mouth, how then are you expected to coherently deal with this teen child?
Several techniques seem to have worked in this conundrum too, one of which is open door discussion.

The open door discussion is a technique in which parents and teens are encouraged to deal with their issues without the so-called boundaries that are usually an intrinsic part of the parent child relationship. A parent keeps no hidden agendas and the teen is encouraged to do the same. This means that there are no covert mom – dad discussions about the teen and every issue is either dealt with at the dinner table or in the presence of the teen. Similarly, the teen is also encouraged to open up and discuss issues that are bothering them in an open forum.

The advantage of this kind of an open discussion is that the defences are consciously kept down while allowing for an informal tête e tête with absolute abandon. The reason why this technique works is also probably attributed to the fostering of a good relationship between teenagers and parents. In fact many studies have shown that this kind of a relationship leads to a positive overall development of the teen with success in school and other activities. The one thing that’s vital to remember here is that both parents participation is preferable.

A non-verbal communication, with you as a dictator will rarely work. Though it can also been seen that a timid, easily overpowered parent is not a good influence on the teenager either and leads to many other unwanted complications as well.

A tumultuous parent- teen relationship is very often interrelated to wayward behavior of teenagers. Unwanted activities such as indulgence in substance abuse and tendencies of violence are just some of the things that can and do happen.

Teens that talk back

This is a habit that just seems to get everyone to pull out their ammunition and start firing in all directions. The best way to handle a teen that talks back is to ensure that you, as a parent, have set clear rules about what is acceptable and what isn’t.
You don’t need to get your feathers ruffled up in the process, as that may also backfire, rather it should be a more firm yet gentle setting of ground rules that allow for some moments of heated venting and some moments when there is obvious realisation that your teen too is almost ‘grown up’.