Let go of the Banana

Let go of the Banana

Once upon a time, there was a farmer. This farmer was bothered by a monkey, on a daily basis. The monkey, from the trees, would come down, through the window, come in to the little house of the farmer and steal the bananas kept in a jar, when the farmer was not at home and away with his farming job.
As was the practice those days, whenever, people were in distress, they would go and seek guidance from a monk. The troubled farmer also, approached a monk, residing on top of a mountain, near the village. He was blessed to receive a brilliant advice. He took the advice of the Monk, and made the jar with a very small neck. Here, he could put one banana at a time inside the jar and keep it sealed. When the farmer was away, the monkey again came down from the tree and trying to take out bananas, put his hand inside the jar. The monkey’s hand could go in but when it was holding the banana in his fist, neither the banana, nor the hand could be taken out of the jar. All the monkey had to do was to let go of the banana, but he wouldn’t! 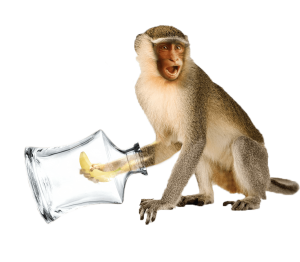 The Monkey was trapped and even with all his efforts, he could not take his hand out as he was reluctant to open his fist holding the banana. The farmer came back and caught the monkey in the act with its hand inside the jar holding the banana. The farmer started beating up the monkey. Despite all the pain, the monkey did not let go of the banana.
When you do not let go of the banana, you have the beatings and sufferings of this world.
Much like the monkey with the banana, we tend to hold on to things, and get trapped. We all need to let go of things, which we are holding on to – so preciously.
When you do let go, you rise from being a monkey and becoming a Monk.
You travel from Ignorance, Darkness and Sufferings to being knowledgeable, being a Buddha, being a Paramahansa.

Let go of the Banana.