Victorious Kidss Educares, being an IB World school believes in creating ‘lifelong learners’. Our educational programs concurrently nurture the holistic development of a child, meaning an ambience of all-round development. They learn Sanskrit, German, French, Japanese, Spanish, Robotics, Abacus, Vedic Math’s, ICT C++, Photoshop, Corel Draw, Western Salsa to Hip Hop, Contemporary to Indian Classical, Bharatnatyam, Kathak, Bollywood Dances, specialized sports language.
Abacus and Vedic Math are two such courses that are a part of our curriculum to strengthen the variety of data input, towards stroking of intellectual curiosity of every child. Because for us, “Every Child Can & Every Child Matters”. The stimulating curriculum integrates Vedic Wisdom which develops a strong sense of respect and courage in one’s own self.

Abacus concept is very friendly and very popular with children of our school. It is one of the most ancient tools used for quick calculations that simultaneously help to boost a child’s confidence and concentration. Vedic Math is a system of reasoning and mathematical analytics, based on ancient Indian teachings called Veda. VKE believes in reviving the goodness of our ancient teachings and Vedantic methodologies.
Students of Victorious Kidss Educares participated in the National Level Championship of Aura Vedic Math and Abacus held on January 27th, 2019. Approximately 156 of our champions took part in different programs/levels of Abacus and Vedic Math, along with many other International School and many more scholars from Symbiosis International, Bishops Co-ed, Vikhe Patil, City International, etc. 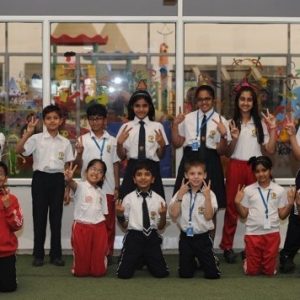 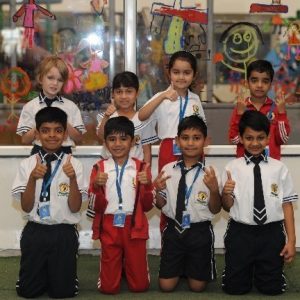 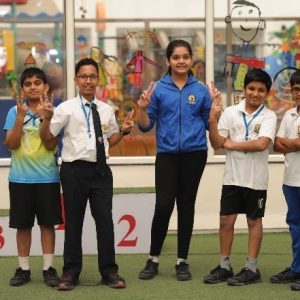 Our 33 champions won laurels in various grade competitions for Abacus and Vedic Math. It was the result of rigorous training sessions held in the months of December 2018 and January 2019 by our experienced teachers. We are extremely blessed and filled with pride to announce the names of the thirty-three (33) winners and congratulate them on their achievement. The students will receive the trophies and certificates.

Congratulations to the winners and their proud parents. The names of the Winners are tabulated below: 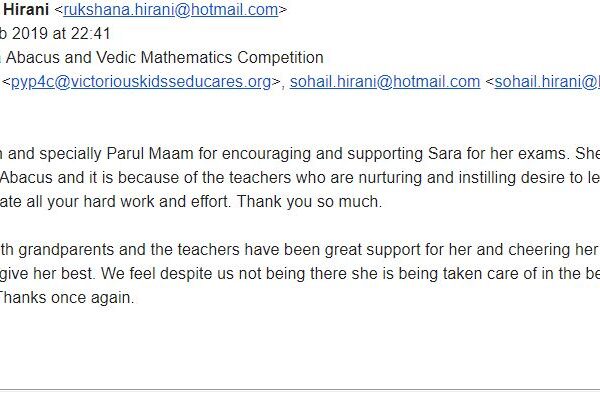 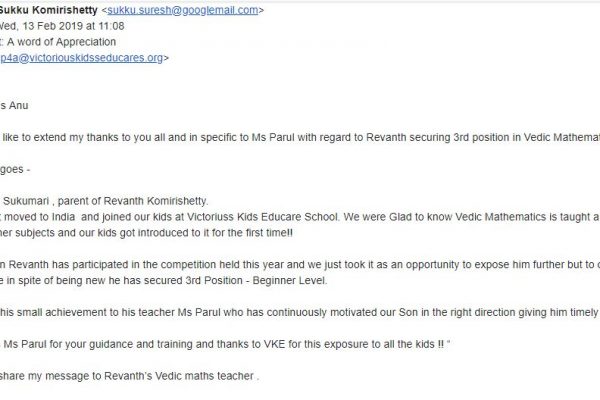