Victorious Kidss Educares (VKE) celebrated India’s 71st Independence Day on Tuesday the 15 of August 2017 and made The Indian Flag fly high with pride and glory to the country. The well planned choreography, was with the messages of ‘Patriotism and Nationalism. The carefully decorated auditorium, with more than 1000 audience was in pin drop silence watching and listening to the messages of the struggle for Independence of our country. The youth and the adults were with wet eyes, watching the sufferings, what our martyrs and heroes had to live through to bring India to where we stand today. The programme was well coordinated, composed and scripted by the students and assisted by the teachers, parents and other staff members. The campus was beautifully decorated with Tri Colour and there was a feeling of joy, festivity and freedom in the air. The whole event was carefully planned and hosted by the students of MYP (Middle Years Programme) of VKE.

Our Chief Guest was a Former cadet of National Defence Academy, Khadakwasla. In the past, he was awarded the President of India’s Sword of Honour. He had taken part in operations over Bangladesh in 1971. He was deputed to Africa as Flying Instructor and was the Team Leader in Botswana. Also, he was a Pilot to the former Presidents and Prime Ministerof India.

The Chief Guest addressed the audience. He quoted that our Independence Day is a day of great significance for the people of India. On this day, India got freedom from the British rule after many years of slavery. He highlighted, that we, as Indians, should stop fighting amongst ourselves for personal gain, name, fame, power, and instead we must fight against terrorism to maintain our freedom. Briefly, he narrated the strategies and the events, which led to today’s Line of Control (LOC) of India. He urged all youths to continue with the struggle for spiritually free from falsehood, corruptions and economically, scientifically strong India. He asked all those to extend willing hands to help the country. He asked ‘Don’t give up, fight must go on’.

The event started with a spectacular dance performances and patriotic songs by the students of MYP. The students performed Bharatanatyam. The students also presented a skit depicting great freedom fighters like Mahatma Gandhi, Netaji Subhash Chandra Bose and Sarojini Naidu. Our students exhibited their extraordinary skill to display a pyramid show, which was highly applauded by the audience.

The programme concluded with a speech by the President, Sir Robbin Ghosh. In his speech, he emphasized on the teachings of Swami Vivekananda, “To establish Truth, practice Purity, to persevere, to be patient ~ that ‘The Sun of Success’ shall surely rise in the horizon. Indians to fight against oppression, to arise, awake, and stop not till the goal is reached’. He remembered the sacrifices made by our great freedom fighters. Our President motivated us to follow the basic principle, which is ‘if you want something, you should give it first’.

At the end of event, the students gave vote of thanks and everyone walked out as proud Indians and clearly with some mission in their heart. 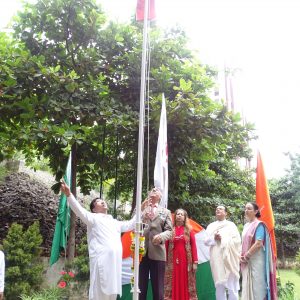 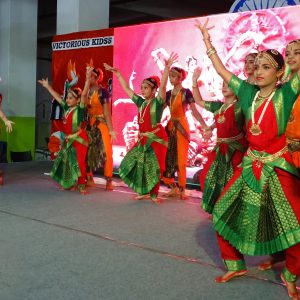 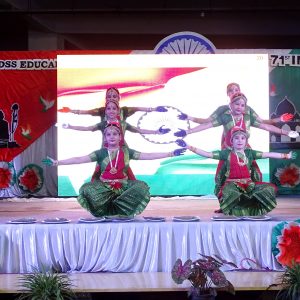 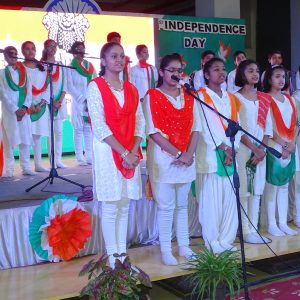 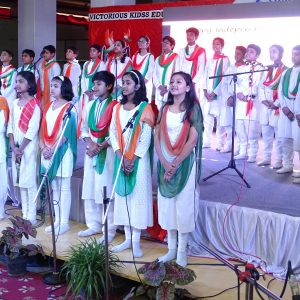 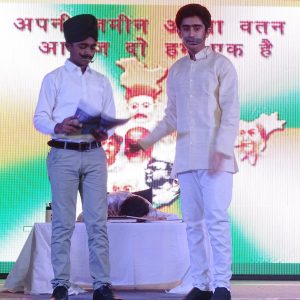