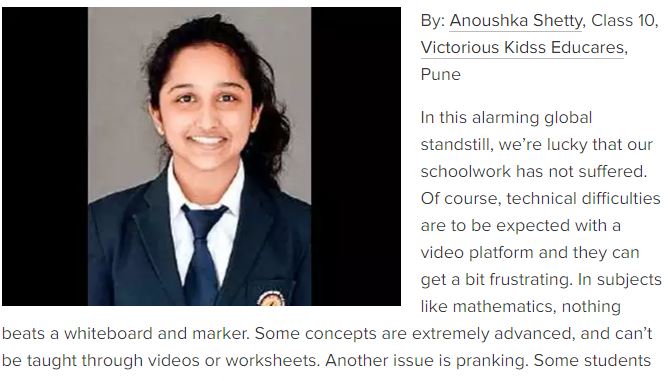 There was, three days back, an article in the TOI main edition,’ how children were throwing pranks and being disrespectful to their teachers in online classes’! Our children, teachers, HODs and Principal Saarada Ma’am, took great objections to that article. That article was also written by some erstwhile Principal of another CBSE school! The TOI  Senior Editor, personally called and asked for some of our students’ reflections. You would see their writing as well the intenseness with which they have been caught displaying their interest in non-stop learning.

Parents, please read the styles of the student’s reflection and the power of their message to the people and other students, teachers and their parents. “I am jealous of these kids. I wish we had this kind of education”, says President Robbin Ghosh. The senior Editor found the article of a very good standard and personally called to complement. The write up has been by a group of six students from our DPI (11 Standard),

Their leader Ms. Anoushka Shetty, has compiled it all. You would be able to reflect on the power of their write up, that they do belong to another species of children. They are not, as we were in our school days? Important reflection, on their own, that they have learnt, are practicing, and as were guided by the school and teacher’s philosophy of academic honesty, no copying and self-restraint? They do belong to another world of teaching and learning of International Baccalaureate (IB) philosophy, coupled with Vedanta.