To Sir with Love

Victorious Kidss Educares celebrated its ‘Founder’s Day’ on Monday, 25th June 2018 with much more passion, zeal and enthusiasm than ever before.The whole school campus was spiritually transformed, with abundance and richness of ancient philosophy of Vedanta. The school was vibrantly decorated with articulately placed fresh flowers, elegant drapes and colourful paper rosettes. All present in the school were delighted and were apparently blissful. They were waiting to celebrate the special day of their mentor, legend and philanthropist with a smile. There was excitement and expectation in the air.

This serene ambience glorified when our Founder and President; Sir Robbin Ghosh entered the premise with Principal Saarada Ma’am, and a request to introduce a small session on ‘meditation’ was placed. Sir spoke about, ‘what is meditation and why do we need meditation in our life? He introduced this ancient process as was evolved by Rishi Patanjali and was practiced by Masters of India. The essence of the practice was to end all human sufferings. Meditation is all about knowing ‘who you are’ and to attain an ‘inner peace’. But how do we do it?

We got a chance to experience this supremacy of meditation with Sir, who elucidated the process of Meditation with such simplicity, that everyone was taken away and experienced the ‘Inner Silence’. Sir wanted us all to learn meditation and follow it every day of life. He explained it this way, “Zeroes ~ by itself ~ has no meaning, whatever number of zeroes, you might be putting one after another, unless they are preceded by a number. If you put lots of zeroes, they make no meaning, but if you put a ‘1’ (One) before two such zeroes, it becomes hundred. If you put 1 before three or six zeroes, it becomes a thousand and so on to a million!”

He said, “Our journey, for most of us today, has become materially driven, meaningless, like these zeroes without a preceding number. We are running after money, property, food, body, sensual pleasures and other such material things. But these are not permanent and as given in all religious texts, they are filled with only ‘momentary’ pleasures. These are literally unreal, yet we consider them to be essential and keep adding the zeroes. How can we shift from unreal to real happiness, from darkness of ignorance to wisdom or knowledge of light? Meaningless and endless zeroes to a number? Meditation as per our ancient sages, is the simple answer. He asked us all, if you are feeling cold and shivering, would you not, shift to the corner on your own house, where there is ‘fire’?

Meditation is “stilling the movement of mind”. It is a state of consciousness, when the mind is free of scattered thoughts. Then you connect to the supreme power, which is within you. A secret, a divine force, a light and all your sufferings would be gone. There are people, who say, “We don’t feel like meditating, as there is no desire, no urge for it”. Sir quoted a famous statement from Vedanta,

“Those who desire the fruit of Life need to take care of the roots.”

Sir Robbin Ghosh has undeniably been a pillar of strength for each one of us. And to show our respect and love, teachers had planned some breath-taking and awe-inspiring performances. The program started with a classical dance ~ praising Lord Ganesha. Taking the inspiration from Swami Vivekananda, our music team presented a Bengali devotional song, quoting, “Mind, come, travel to your own home. Why are you behaving like a foreigner?” It was followed by two enthralling and foot tapping group dance performances, on songs “Boomro Boomro” and “Aayo re mharo Dholna” that electrified all the audience. Then it was the Quiz time which involved everyone present. It was quite exciting and interesting, when teachers and staff were made to answer questions about Sir and his life.

The turn of events led to talk by few of our teachers who expressed their gratitude towards Sir and how he has influenced their life. Next in the row, was our dance team who ignited the stage with their moves. Few staff members sang the birthday song which was followed by cake cutting ceremony.

By the grace of divine mother, the school received special signature edition Bhagwad Geeta, which is now showcased in our President’s office. On this special occasion, a website was launched www.robbinghosh.com with an idea of sharing his philosophy, inspiration and divine thoughts to the World. Sir expressed his deepest gratitude towards the whole school for making his birthday a memorable one. His message to the teachers, staff and devotees were to establish three morals in life, “Believe in yourself”, “Believe in God” and “Speak the truth”.

Sir was presented with beautiful bouquets and warm wishes throughout the day by the students, parents and staff members. A delicious lunch was organized by the school for all the teachers, staff, the entire support staff and the Devotees. 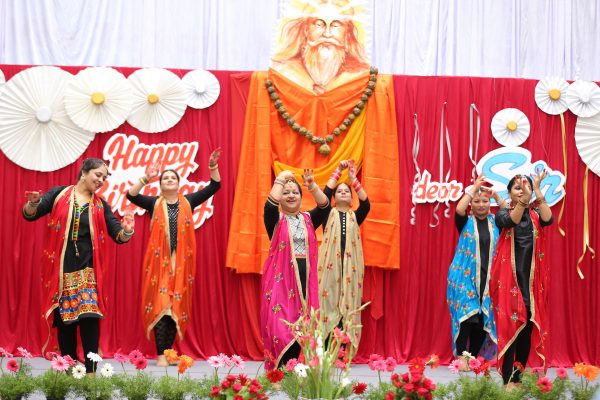 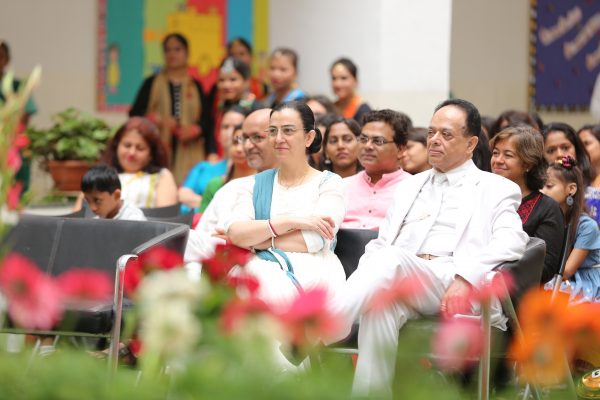 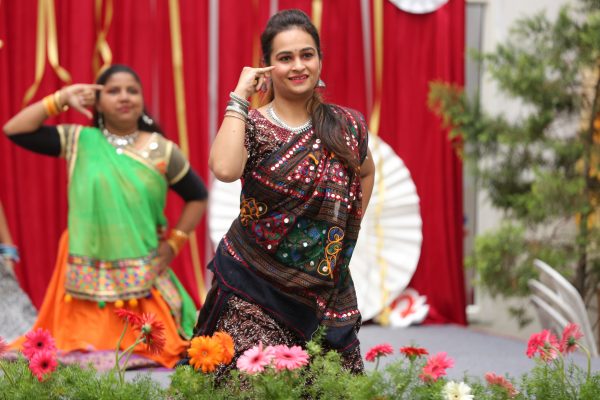 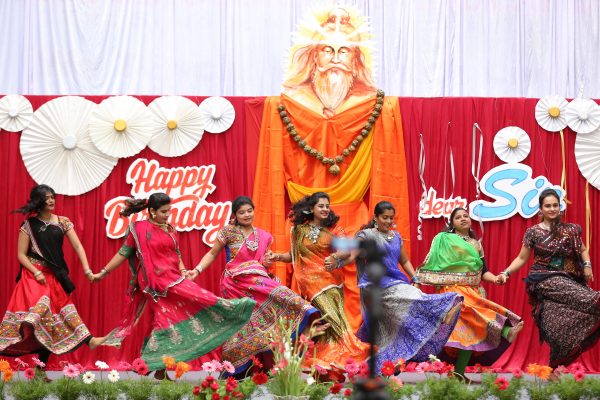 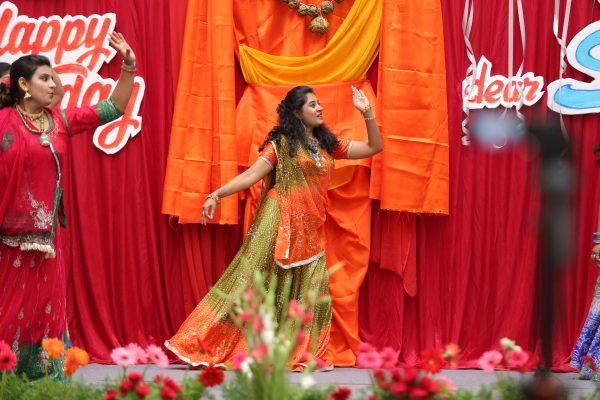 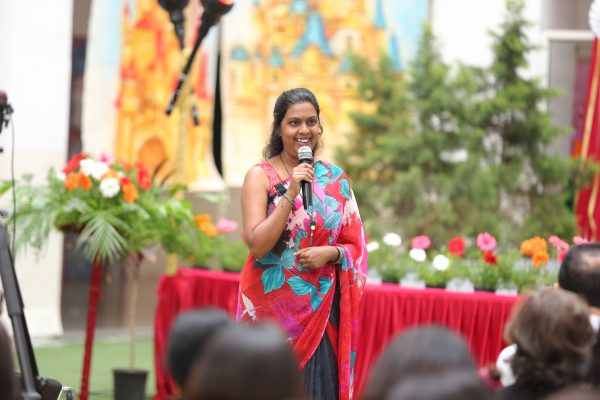 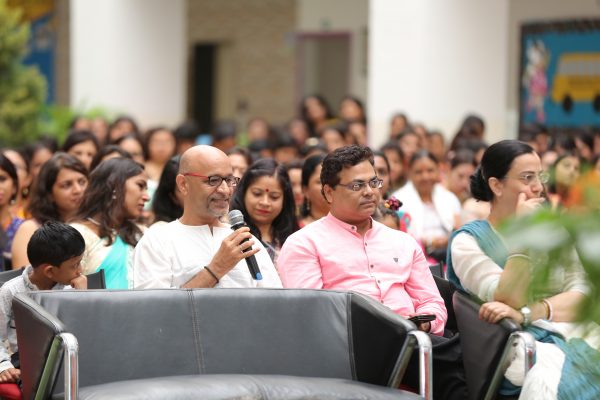 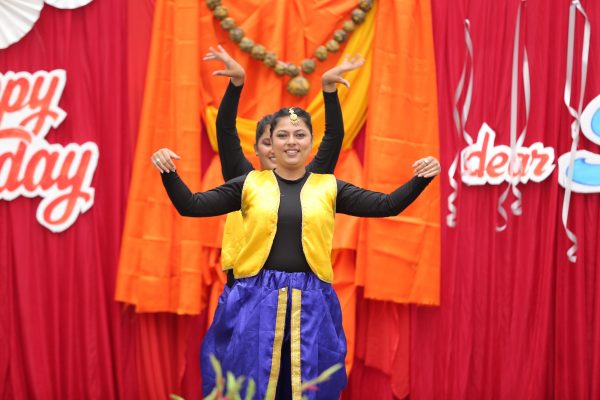 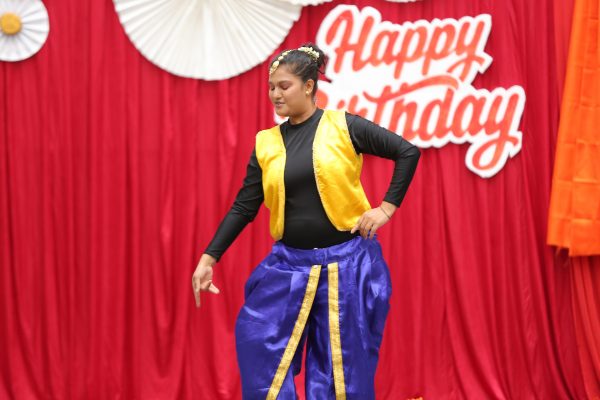 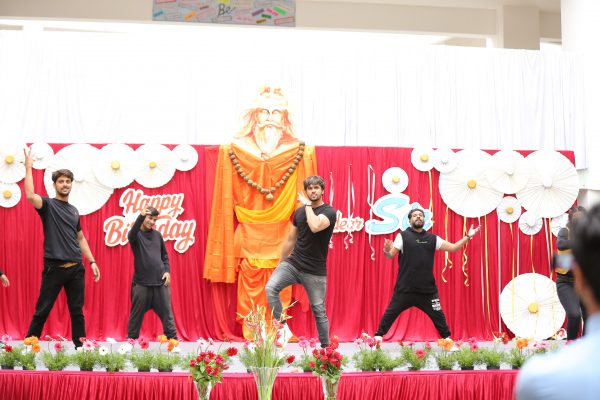 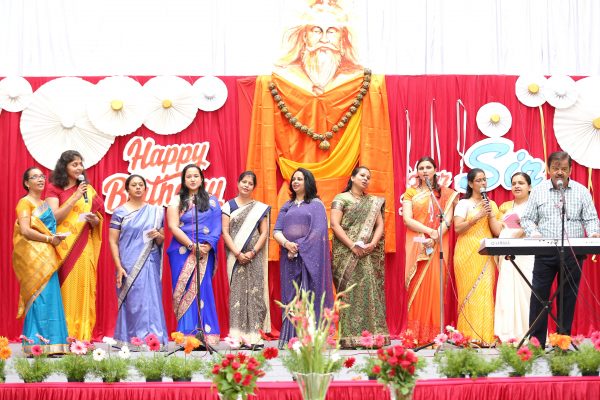 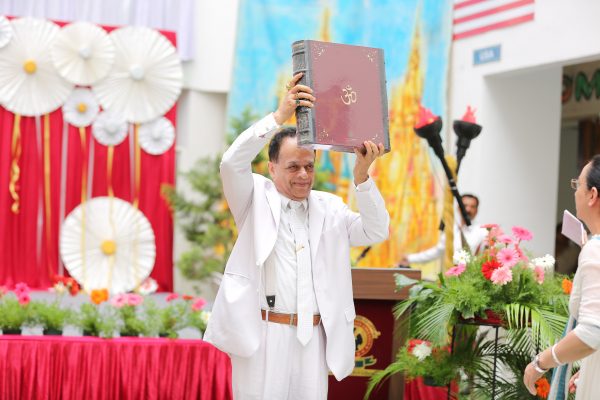 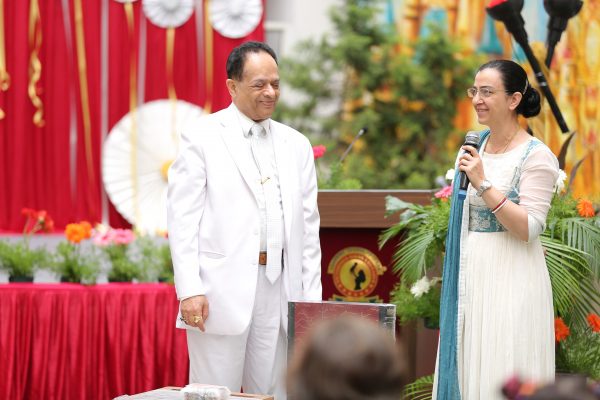 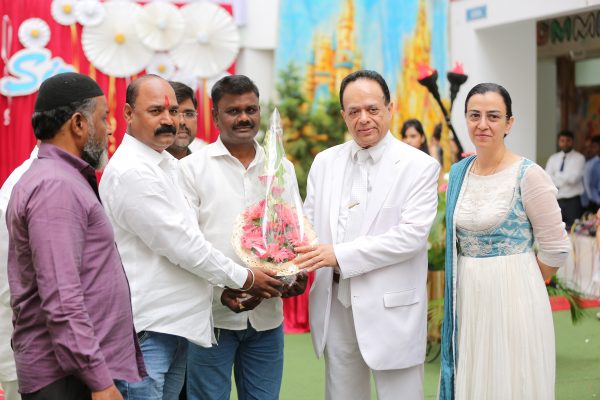 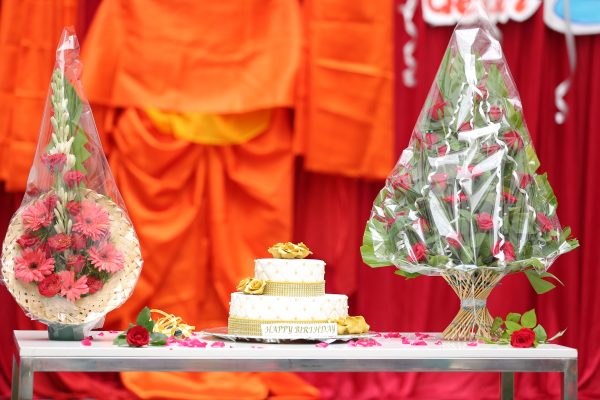 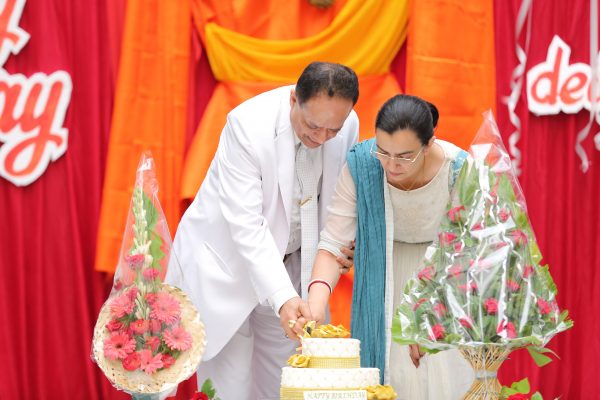 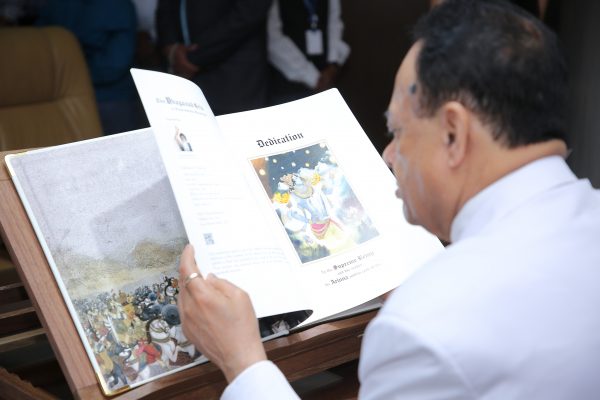 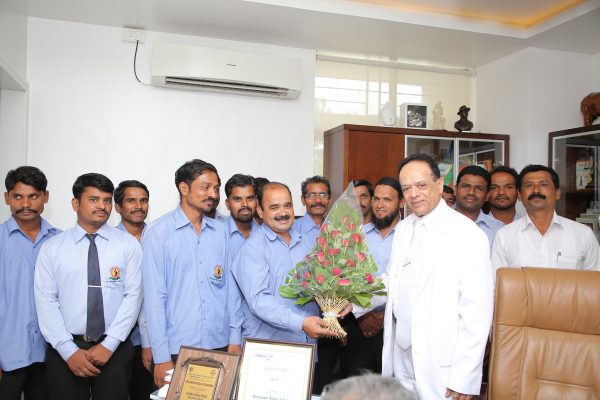 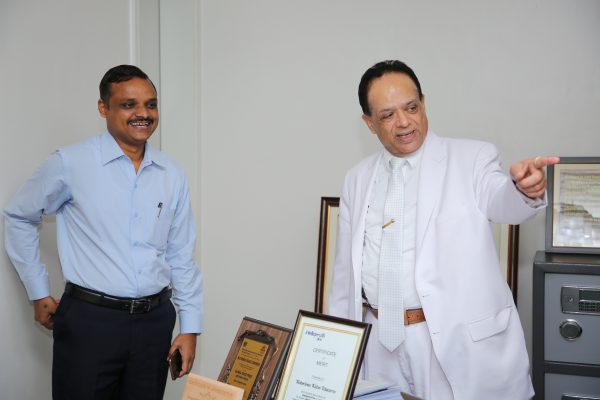 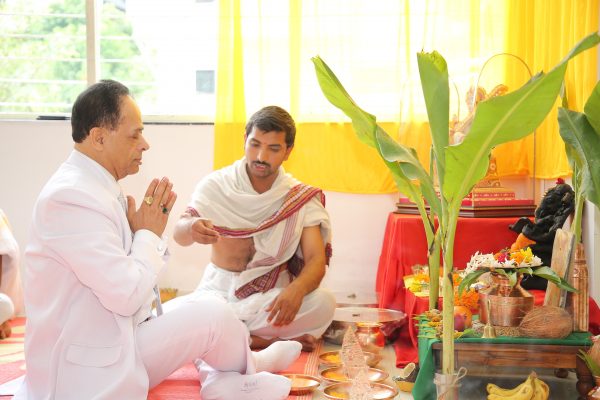 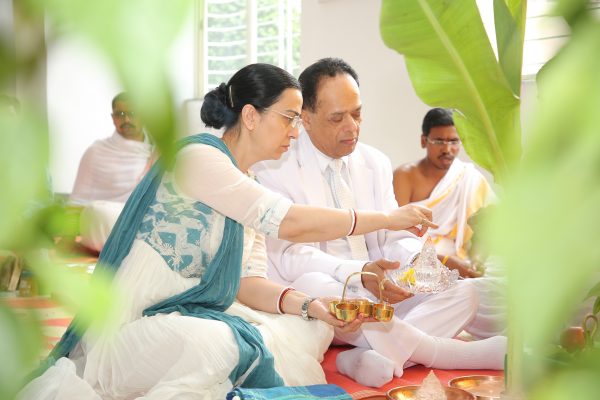 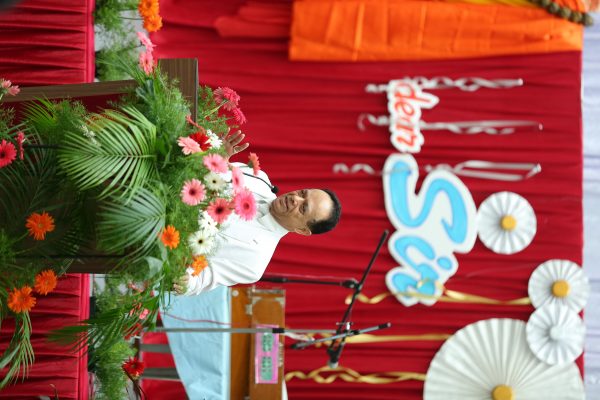 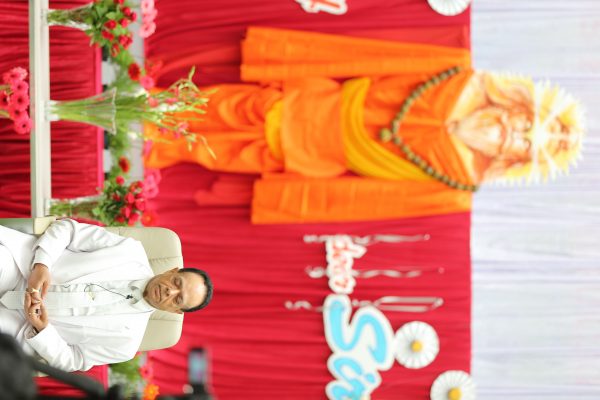 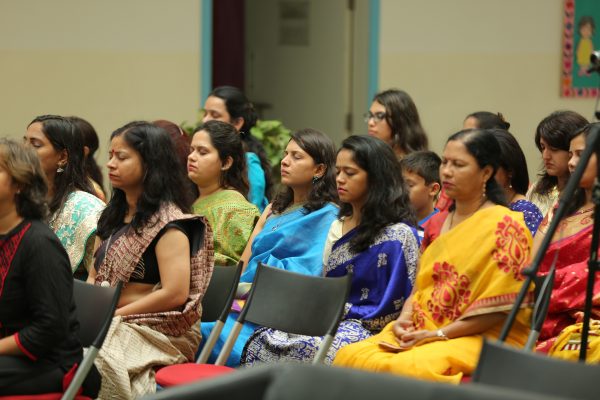 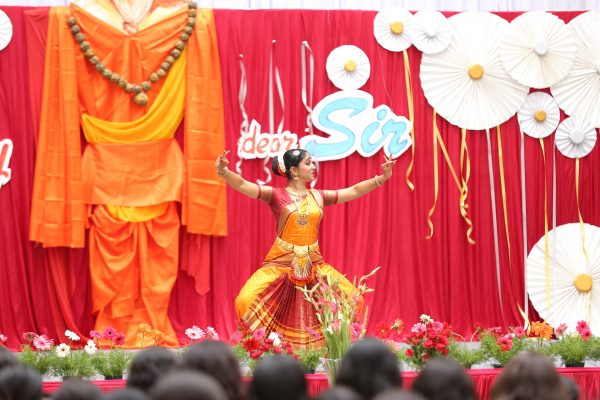 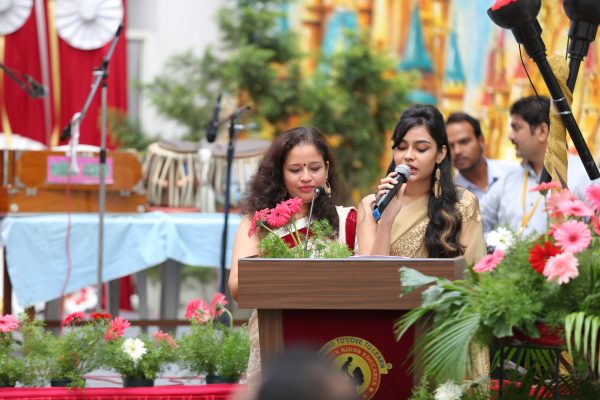 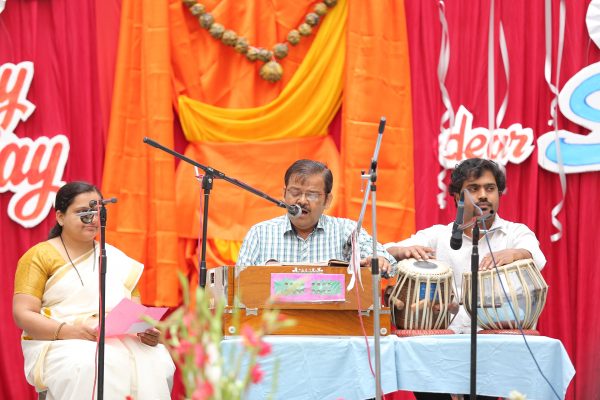 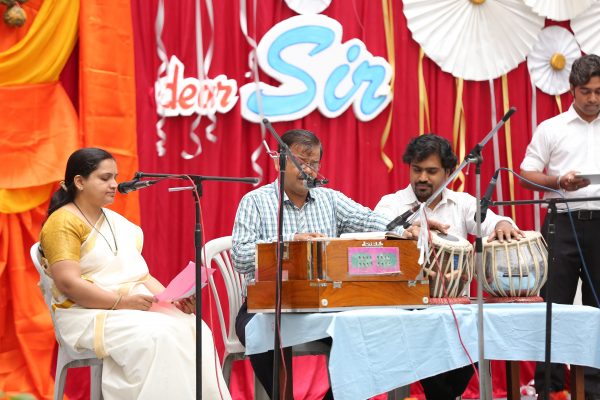 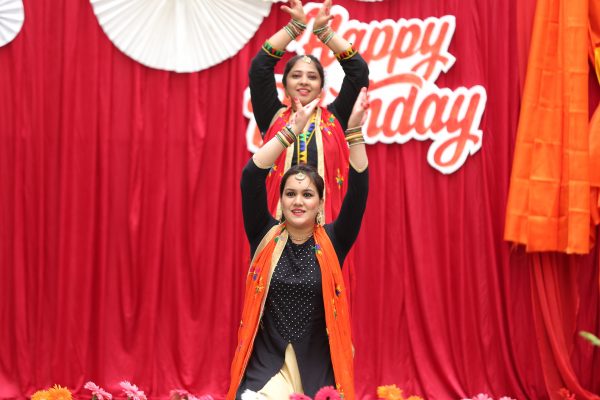