14 prizes were secured by our VKE champs for Vedic Math, while 15 prizes were won in different levels of Abacus. We are extremely blessed and filled with pride for the dedication and hard work our students have put into achieving success in this competition. The students received their trophies and certificates during the Prize distribution ceremony held at VKE on 7 April 2017. 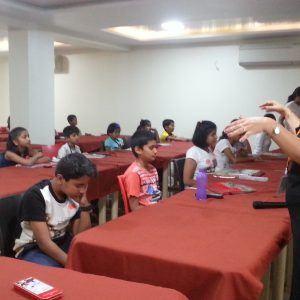 The children of Victorious Kidss Educares, during the preparatory and practice days, before the Championship, displayed great interest in conceptual Mathematics. With the specialized guidance, closed support and encouragement these children developed a passion for Mathematics and an intense love for learning. It is worthwhile for parents and children to know, as you read along, to share the progress of some these champion children of our school.
Nia Gathani has been a student of VKE since she was only 1.5 years old. She has manifested a lot of attributes at VKE since then and has achieved accolades in various academic and extra curricular fields. We find each one of these children unique in their own way and have developed high level of sincerity and Intelligence Quotient, while they have grown physically robust and healthy at VKE. The recent feather in Nia Gathani’s cap has culminated into a hat-trick in Vedic Maths Championship in her participation, since the last three years of Championship. The current performance has been with her standing first at Level 2. This is the third year in a row that she has stood first in Vedic Maths PYP 4 – First in beginners level, PYP 5 – First in level 1, MYP 1 – First in level 2.
Rudra Agarwal, student of MYP started his winning spree from when he was in PYP. He has been a winner in every Abacus and Vedic Math competition, since the last four years. For the first three years he won second, first and then second position consecutively, in Abacus Level 3 and 4. And this year he gained second position in Vedic Math Level 2.
Ritvik Agarwal too has excelled in these competitions the last three years winning two prizes of first and second spots in Abacus Level 1 and 4. And this year he showed his mettle by winning the first position in Vedic Math Level 1.
In order to highlight the winning journey of one of our very young students of VKE, has won prizes in two consecutive years. Jack Hallquist student of PYP II (7 years of age) attained the first position in his first year in Abacus competition in Beginners level 1. This year again he won the second prize in Abacus competition Beginners level 2.

Our two more rising stars are Ipshita Goel and Arnav Agarwal from PYP who joined the school recently, but they are already on the path of success. Ipshita Goel stood third in Vedic Math Beginners level; Arnav Agarwal came second in Vedic Math level 1.
Ira Prabhudesai was second and Rudraaunsh Pandhe stood third in Level 1 Vedic Maths Competition.
With sustained guidance, strategies and sincere commitment from our facilitators, our champions managed to reach from 30 sums in the initial stages of practice, to a count of 110 sums on the final day of the practice of just twenty days!
The whole journey has been successful due to the unrelenting support by all the parents and their sincere encouragement at each stage of the competition.
Vedic Maths as compared to Abacus is more challenging and yet more rewarding a learning process. Abacus was designed in India as well as Eastern part of Asia, such as China, Japan, and Korea etc. The concept of Abacus was to develop the logic brain or mathematical brain, amongst eleven (11) Intelligence centers and is generally widespread and pursued amongst the younger kids. The Vedic Maths on the other hand, is from fourth grade i.e. above nine years of age.
At VKE Vedic Maths and Abacus start, contrary to normal believes, at much younger age at PYP I, which is chronological five plus years of age onwards. And by the time the children graduate to 7, 8 and 9 years of age at VKE, they are known for their expertise in State Level Competitions in India.
Vedic Maths is a rich heritage of ancient Rishis and Sages of India and Internationally, in few major countries, such as USA, UK etc.
Swami Vivekananda had messages for the youth, “Success comes from Purity, Perseverance and Patience.”
At Victorious Kidss Educares, we believe in the secret potentials hidden within every child. And that they are all born winners.
‘Discovering this secret, we believe is schooling, is parenting.’ Therefore, in our eyes at Victorious Kidss Educares (VKE), ‘Every Child Matters’ and each child is a potential winner.